Skip to content
HomeMeasuring Success: A Breakdown of the First Half of 2015

Every now and then, you’ll find an indie publisher posting their sales data (money and all) direct on their website for all to see. The biggest one of them all would be Evil Hat Productions, currently the mecca for all indie publishers looking to make it big. Those with business degrees would wonder why someone who do such a thing and give away any potential secrets to their success or reveal how poorly they’re doing in the market, but that’s the thing about indie publishing: we all ride on everyone’s success. Besides, the motto around here is “breaking all the rules,” so it’s not like we’re about to do what’s proper.

As the Big Cheese around here, I’ve been meaning to get around to posting these at the start of every quarter (April, July, October, and January) since our merger with Mystical Throne Entertainment. It’s just never panned out that way… until today. So when I say these are the figures Broken Ruler Games produced in the first half of the year, there should be a clarification that these results are actually what’s gone down since the merger back in late November of 2014. In essence, this is how things have fared with BRG since we started bunking with MTE. A fair warning that I will not provide any $ with these totals as anyone can figure those out if someone was really set on it and as BRG is in a partnership, such figures were deemed irrelevant and improper for this post.

Let’s Start From The Top, Shall We?

First off, the total figures from November 23, 2014 to the end of June 2015. Plain and simple, a total of 2642 purchases – downloads, freebies, and POD sales –  took place (not including bundles, of which there were 26). Of those, 1933 were made available at no profit to us whatsoever for a charity bundle back in April of this year and 541 came from the recently exhilarating Bundle of Holding last month. Here’s a breakdown of exactly what was purchased, regardless of source.

Before vs. After Partnership

As noted above, BRG formed a development partnership with Mystical Throne late last year, thereby allowing myself to move away from the day-to-day requirements of publishing and carry on with game design and project development. Not a day goes by when I’m not thankful for that and to prove how effective and agreeable a decision that was, I’m going to share one tiny dollar sign with you.

That’s the exact difference in net earnings BRG has collected since the partnership formed compared everything else before hand. Yep, in only seven months and a few days, the partnership has allowed us to make almost as much as it took in 2.5 years trying by myself. Which is why today’s lesson is always learn how to chew your humble pie and know when to turn to someone with better skills than you.

While I will admit the biggest difference was participating in the Bundle of Holding, no doubt about it, for otherwise that difference would be closer to $600 but even with individual downloads alone there are 667 more copies of Killshot products on people’s computers since the partnership than beforehand. Even if a large portion of that boost came from a charity bundle and not a dime into our coffers, that’s a significant number more gamers with opportunity to discover our work (and we were able to help out a family in dire times, making it well worth the extra dust in the wallet). In short, there are now 4,609 editions of Killshot around the world as of the end of 2015’s first half. All in all, this year’s turning out Broken. (Wait, does that sound right?)

Up And Coming? Why, ScreenPlay’s Playtest Edition, Of Course 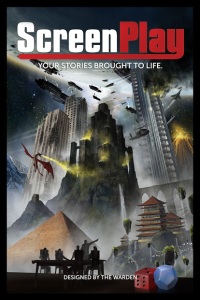 The time has come to start filling the virtual shelves with more than just Killshot products. It’s time to start moving forward with our next game, ScreenPlay. At this time, I’m cracking away at a special Playtest Edition of the storytelling RPG system with plans to launch this sneak peak by Autumn of this year. And by Playtest Edition, I mean a glimpse at what the game is about with enough detail to break it out at your table (complete with advice for Directors and Writers crafting their own tales and an introductory, grim fantasy treatment called Ironbound) and incentives for readers and players alike to help fortify this game into something stronger than I could ever imagine. Think of Kickstarter-style rewards without having to shell out money and instead sharing your feedback. Details to come as they become available, so stay frosty on that by keeping an eye on our ScreenPlay page.

For now, that’s everything… oh, wait. There is one more thing I’d like to announce, something a little more personal and fitting to this section. There’s a new body here in the Broken Office and while his skills won’t be put to the test for many years to come, there’s a new member of the team here nonetheless.

My son, Logan. And yes, his dice are already on order.